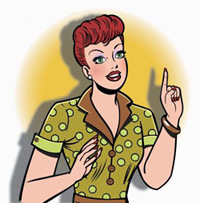 Next we are going to provide you with a dictionary with some expressions that women often use on a daily basis but they mean something very different from what we really think.

Eg when a woman says no, referring to "do not take out the garbage", actually means that you should take it out and also without protesting. There are many cases of this type, so to get you out of your doubts we have compiled the most common so you don't screw up.

Of course, the information collected in this post is made from the point of view of humor and it does not intend to offend anyone since we men are the first who could make another dictionary of this type for ourselves.

This is the word that women use to end an argument when they have decided that they are right and now you must shut up.

If it is being fixed, it means HALF HOUR. Now if it tells you FIVE MINUTES it is only five minutes if they have given you an additional five minutes to finish watching the game before leaving to help with the purchases.

It's the calm before the storm. Means something. And you should be totally alert. Discussions that start with NOTHING, usually end with OK (See point 1).

Related article:
What are the weak points of a woman?

(also GO FORWARD-DO IT or DON'T-DON'T BOTHER ME): It's a challenge, and I don't give you permission at all. Do not ever do that!

Actually, it is a word but usually men do not understand it. A loud and clear sigh means that she thinks you are an idiot and wonders why she is wasting time arguing about NOTHING (See point 3 to understand the meaning of NOTHING).

This is one of the most dangerous phrases a woman can say to a man. VERY GOOD means that she will think carefully before deciding how and when you will pay for your mistake.

A woman thanks you for something. Do not ask. Do not hesitate. Just say NOTHING.

(Also AS YOU WANT, AS YOU SAY): It is the feminine way of sending you well to shit ...

QUIET, DON'T WORRY, LEAVE IT AS IT:

Another dangerous phrase that means that although the woman has repeatedly told the man to do something, she is finally doing it herself. This will later prompt the man to ask 'WHAT'S wrong?' To find out the woman's answer, see point 3.

When the woman asks him something and the man gives a silly or unbelievable explanation. She only says Aaaahhh but she knows that the answer did not convince her and you can be sure that she will continue to investigate.

But do what I want

DO WHAT YOU WANT:

But you will pay dearly

Of course I'm pissed off …… IMBECIL!

If you are falling asleep, wake up and listen to me

TONIGHT YOU ARE VERY LOVING:

Do not approach me, or touch me that I am not willing to make love.

Tell me I'm so hot, just say so to end the relationship.

TURN OFF THE LIGHT:

I have cellulite and so you don't see how I pretend.

I WANT TO CHANGE SOMETHING IN THE HOUSE: That means that you will go into bankruptcy if you give the ok to redecorate the house, since that something means everything.

DO YOU LOVE ME?

I'm going to ask you for something ...

HOW MUCH DO YOU LOVE ME?:

And it costs a lot of money

WE WOULD NEED OR NEED…:

WE NEED TO TALK:

Cover your ears as you want to complain about something

Do you know any more expressions of this type? Let us know in the comments!

Related article:
Flirt or be seduced

Full path to article: Stylish Men » Fit » Couple and Sex » What does a woman mean when she says ...?