The world of cinema is making a authentic boom of its classic superheroes and approaching fashion more current men's, such as shirts, sneakers and of course underwear, like the one we show you today, some original garments Diesel boxer with these creative designs.

Thus, it should be noted that between Marvel and DC Comics and with the tribute made to Captain America by the firm Diésel, the limited edition underwear has been created for those men who love to remember old times and wear their superheroes in underwear, both boxers in white with green details and blue, red, black with gray details like Batman's or green like Masa.

In the same way, tell you that The Diesel firm has agreed with Warner Bros to launch this original line of underwear for men, a collection inspired in a special way by the most representative characters of the world. world of comics, like Flash or the Joker, one of the funniest of these boxers. 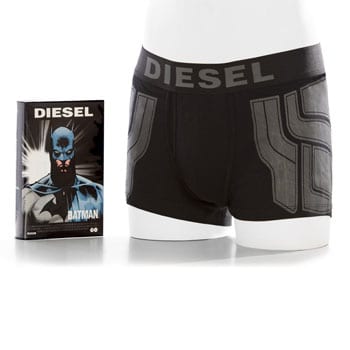 On the other hand, you should know that these boxers are made of the best fabric, so that they fit perfectly to the male figure, wearing a wide rubber band in the waist area so that they are very comfortable once they are on. This underwear is stored in a special box dWhere the original drawing that the boxer wears is reflected, to be able to collect them because they are the most original.

Also, mention that if you were looking for an alternative and completely different underwear, or you want to make a gift to your partner, do not hesitate to have these Diesel boxers of the superheroes, because they are very original and high quality, so that you are comfortable at all times, because there is nothing better than not feeling uncomfortable with underwear.