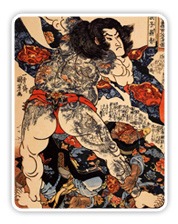 Tattoos were a practice eurasian in times neolithic, being even in some mummies with an antiquity of up to 6.000 years.

The word tattoo comes from the English word «tattoo», which in turn comes from the term Samoan "Tátau", which means to mark or hit twice (the latter referring to the traditional method of applying designs or templates). Sailors traveling the Pacific encountered the Samoans, and those who were fascinated by their tattoos mistakenly translated the word "tatau" as tattoo. In Japanese the word used for traditional designs or those designs that are applied using traditional methods is "irezumi" (ink insertion), while "tattoo" is used for designs of non-Japanese origin.

In Spanish tattoo enthusiasts may refer to tattoos as Tattoos, or the Castilianized term of «Tatu», although neither of these two terms are yet included in the Dictionary of the Royal Spanish Academy.

In 1991 a Neolithic mummy was found inside a glacier: the mummy had its entire back tattooed. From this discovery it can be said that the tattoo is as old as the man himself. However, not all cultures that used tattoos have done so for the same purpose. Next we will make a list of the most prominent tattoo cultures and uses. We will try to maintain a chronological linearity as far as possible.

Polynesia: Apparently, this region of the world has the longest tattooing tradition. The different tribes of Polynesia used tattoos as body ornamentation without losing their strong communal sense. The tattoo began at a very early age and lasted until there will be no virgin body region of the pigments. Beyond its aesthetic sense, the tattoo conferred hierarchy and fostered communal respect to those who wore them on their skin: the more tattooed someone was, the more respect was owed to them. In particular, the Maori used the tattoo for battle. The drawings on their skin contributed to their famous strategy of scaring their enemies.

Egypt: in this case it was mostly women who got tattoos. He gave the tattoo protective and magical functions. The supernatural character of the tattoo was not unique to Egypt: many cultures gave this power to tattoos.

America: In North America, indigenous people used tattoos as part of the ritual of passage. When a person passed from puberty to adulthood they were tattooed in order to protect their soul. However, this was not the only ritual use of tattoos in this region of the world. In Central America, the tribes used tattoos as a commemoration of those who fell in battle and as a form of worship of the gods.

East: approximately in the XNUMXth century BC the tattoo reached Japan. From its insertion into Japanese culture, the tattoo was being used by increasingly powerful sectors until it was used by an Emperor in the XNUMXth century as a body ornament. We point out its aesthetic use because in Japan there was a custom to use the tattoo to mark criminals. This brand was intended to make people who disobeyed the law repudiable people for their entire lives and everywhere as a result of carrying the brand of shame with them. Suikoden is a Chinese novel that was translated into Japanese in the XNUMXth century. This book renewed interest in the tattoo by making it a popular form of decoration and collecting.

En Japan one of the most important tattooing traditions in the world has been formed. However, in 1842 Emperor Matsuhito decided to ban the practice of tattooing. This happened because the country was interested in opening up to the world market and did not want to give an image of barbarism to the world.

West: the tattoo reached the West by sea. Captain James Cook's expeditions to the Polynesian islands were the starting point of the tattoo to the West. During these expeditions, the sailors had contact with the indigenous Maori and with other tribes who “taught” them the art of tattooing. Upon their return, the sailors opened their own tattoo studios and popularized this discipline among the popular sectors. In 1870, what was apparently the first tattoo studio was opened in New York.

During the Civil War the art of tattooing experienced great growth and popularization. Fellows, Hildebrandt and O'Reilly, the inventor of the tattoo machine, were in charge of making tattooing a profession.

However, the tattoo was not completely free from its inhuman tradition. During Nazi Germany (as the best known example although it is not the only one) the tattoo was used to mark the prisoners of the concentration camps.

In recent years, the tattoo has been progressively incorporated by society and it is today that it fulfills purely aesthetic functions and does not distinguish between social sectors. Although the tattoo is not accepted in some spheres of society, it is breaking through prejudices and drawing its lines on the bodies of people around the planet.