A stylish man has to know basic things about boats, their classifications and terminologies. In case you don't know anything, don't worry, today I will teach you some basic things so that you look like a Duke when it comes to talking about ships.

There is a marine terminology to name the basic parts of a boat, so we have to front part is called bowIn the rear is called stern, the side left is called port and right side is called starboard. The center line that runs longitudinally through the structure is called "Bay" Additionally boarding is the verb that describes the action of joining the boat.

Reduce It is the action of removing improperly accumulated water from a boat.

Cover It is the passable part of the boat.

Superstructure It is the one above the deck of the ship.

Anchor or anchor It is a nautical instrument that allows a ship to fix its position in the sea without having to worry about the current, opposing the force of the tide. The anchor anchor usually consists of two or more hooks that are responsible for its clinging to the seabed, preventing the boat from being dragged adrift. Small boats have only one, which is attached to the boat by means of a rope or chain, depending on the length and current regulations. Larger boats usually have three, one in the stern and two in the bow, hooked by chains. The heaviest anchors can reach three tons. In tankers of one hundred thousand tons, the anchors weigh from thirteen to fifteen tons, and in larger ones more than twenty tons.

On-board technology
Currently ships use modern communication systems, ranging from satellite locators that report their position in real time, to having a voice, data or fax and email connection. What has been implemented is communication through satellite communication systems, for which we have two systems that are very important: Cospas-Sarsat and the invarsat c system; the first has coverage of the entire terrestrial globe and the invarsat c system has a coverage of lat70 ° n and lat70 ° s, which allows us to have a communicated trip.

For which these two systems named above allow us to use epir radio beacons (they are disaster location systems) these systems are components of the GMSS (global maritime distress and safety system) smss. 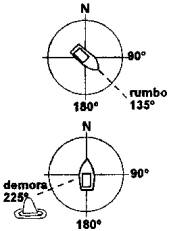 Direction is measured clockwise from North. 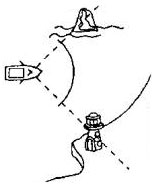 The most common way to determine position is to find the intersection of two lines of position, obtained by bearing to objects on the chart at an angle of approximately 90º.

These are then plotted on the chart, the point where they intersect is the ship's position. The closer the ship is to the objects, the less margin for error there will be. Taking the bearing of three objects, preferably at angles of 60º, the position will be even more exact.