The vast majority of men prefer the short hair. And we do it, mainly, because it is much more comfortable to maintain than long hair. In that sense, we are much more practical than women.

However within short hair there are countless styles and cuts. And it is that, with each cut we can vary our way of styling or hairstyle. For all those faithful followers of short hair we have prepared this special in which we collect all the trends and style in cuts specially designed for short to medium short hair.

Shaving is a classic that never goes out of style. A simple haircut that does not understand ages or styles. Whether you wear it very close and evenly, or if you wear it with a small gradient, it is a haircut that brings a lot of character and, above all, masculinity. The only thing you have to do to keep it in perfect condition is visit your hairdresser or barber at least every two weeks. How is a Jimi Hendrix easy to get there are those who prefer to scrape themselves at home, in this case you always have to shave in the opposite direction of hair growth. In this post that we already published in 'Hombres con Estilo' we give you all the steps to get the perfect shave.

El french crop It is one of the most flattering cuts out there. Characterized by some very short sides contrasting with a slightly longer, forward-combed top with bangs. We could say that it is the second option after shaving for those who bet on very short hair. What many do not know is that the french crop It is an evolution or reissue of the classic hairstyle of the Roman Emperor Caesar Augustus, who wore it with his recognizable curls. It triumphed in the 90s among other things because many celebrities like Brian from the 'Backstreetboys' wore it; and, now, in 2016 it has returned with strength and to stay. By the way, this cut works well for both straight and wavy hair and, in addition, within it we can play with different lengths of bangs.

The long pop-style bangs could well be an evolution of the french crop. For this cut, the bangs are left longer and more populated like the sides that, instead of going in a hurry, are left slightly longer. It is a cut to be done with scissors, leaving the area of ​​the sides more unloaded as opposed to a very dense fringe. It also works great for both straight and wavy hair. The hairstyle became very fashionable in the 90s by bands like 'Blur' and today it has made a strong comeback due to its versatility.

El undercut It is the haircut of the moment, the hairstyle that sweeps social networks like Instagram. A haircut that is basically done with the fade or fade technique. The cut is characterized by a long and voluminous top, contrasting with short sides that are decreasing from longer to short, top to bottom. The cut can be done by creating a more subtle evolution of the length of the hair or, on the contrary, creating large and emphatic contrasts. This type of cut has so many possibilities that today we could say that it has become a viral phenomenon.

The blunt cut is characterized by short locks that are very discharged. It is usually worn with the sides very tight and is done emphasis on the toe of the top. It is a very versatile cut despite being quite short since it can be played with hair in different finishes. It works well with hair up or spiky and, in the same way, playing with the strands in different directions.

The pompadour had its heyday in the 50s. The hairstyle characterized by combed hair like a toupee swept at this time thanks to the 'Grease' phenomenon or the popular Elvis. Although, what not everyone knows, is that it owes its name to the aristocrat Madame Pompadour, one of the lovers of Louis XV, who wore these raised and voluminous bangs. Nowadays he has made a strong comeback thanks to style icons such as David Beckham or Bruno Mars. The modern pompadour has been reinvented with heavily faded and short sides, as opposed to heavily bushy bangs..

Side parting on short hair

The stripe to the side is a another of the classics of men's hairdressing that never goes out of style. In fact, it is a hairstyle that has been in trend since the 4th years. It has never stopped getting carried away. The side parting is the wild hairstyle, a style that suits most men and that can be worn with both short hairs and longer hairs. The last update of the cut is the one that marks the line in a fixed way, an effect that is achieved by drawing it during the cut with the shaving machine.

It triumphed in the sixties popularized by the urban tribe of English origin. The mods they made this fashionable hairstyle with short and straight bangs with semi-long sides that become more prominent in certain areas such as the sideburns. The cut can be worn as we see with a slight movement at the ends or combed for an ultra-smooth effect. Groups like 'Oasis' have been champion of this cut that timidly begins to become fashionable again. 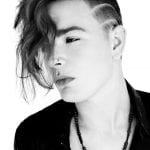 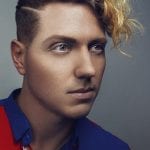 The cut is marked by a great asymmetry in which the tight sides contrast with very long layered bangs. We could classify it as a variant of undercut, as it is also achieved with the gradient or fused technique. In recent times it has become fashionable thanks to singer Justin Bieber, who has worn it with dyed platinum blonde hair. Today, there are those who have marked the radicality of this cut with shaved lines on the sides achieved with the razor.