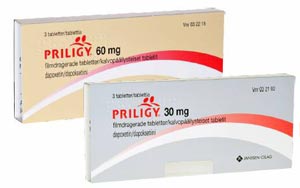 A few months ago we had announced in Stylish Men about him launch of a new pill to control the premature ejaculation call Priligy.

Now, Spaniards who suffer from this disorder will be able to acquire this pill as of yesterday, which for it to take effect, must be taken between 1 and 3 hours before having a sexual relationship.

Premature ejaculation is a disorder characterized by a man's difficulty in controlling ejaculation during sexual intercourse. Although in most cases there is a psychological component, there are also many physiological causes.

Priligy helps prolong the time to ejaculation and improve the anguish associated with this problem, although it does not definitively end it. According to the Head of the Urology Service at Hospital La Zarzuela, Ignacio Moncada, the drug acts at the brain level by modifying the amounts of a neurotransmitter in the hypothalamus that is altered at the time of sexual intercourse. Therefore, the drug "Used on demand" each time the patient considers that he is going to have a sexual relationship, not being able to take more than one tablet a day. Its effects are quick, as well as its subsequent elimination from the blood and it is advisable to take it with water, avoiding alcohol consumption.