There are those who think that men with rounded faces have a difficult time choosing hairstyles. And, although this theory may be half true, the truth is that there are a number of hairstyles and haircuts that tend to favor men with rounded features.

In addition, there are several style tricks such as growing facial hair, which can help create shading on the face and make these types of faces where the chin or cheekbones do not stand out especially. Contrary to what many may think, these types of faces are not exclusive to people of a certain weight, and there are many thin men with completely rounded features. For all of them, today we will see the best haircuts, the most flattering for this type of round faces.

Short bangs for round face

The short bangs style french cropped very straight and with contrasting sides is a haircut that stylizes a lot on round faces since by marking a line on the forehead and the rest of the face, the face is presented more geometrically, creating a more angular sensation in this type of round-shaped faces. Within the short bangs we can present different variations when styling; with movement and with a messy or straight appearance to the tabula rasa. It's up to you.

Like the previous one, the longer bangs and hairstyle with a lopsided effect is a cut that stylizes a lot on round faces. And it does since covers the entire upper forehead giving the face an angular, more triangular-looking feel. As with short bangs, we can stylize the cut in different ways, although this type of bangs are best suited to being hairstyles with a lot of movement and a slightly tousled, natural look. 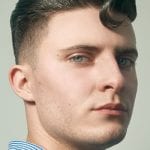 The classic toupees or pompadour hairstyles add height to the round face and therefore flatter it. This type of hairstyles with a lot of volume on the upper part lengthen the silhouette of this type of face giving them a more oval shape and therefore more stylized. In addition, they provide a few extra inches that never hurt.

The half-length hair is another hairdressing classic that works very well on this type of face and does so because marks a very good contrast between face and hair, thanks to the long locks the face acquires depth and, in this way, looks more angular. The question of the length of the hair is a matter of taste, there are those who prefer a paraded half hair with layers at different levels or those who directly prefer the male version of what would be a cut grain feminine. There are also those who go straight for a blunt length below the shoulders. It's a matter of taste.

The vast universe of faded hairstyles have done a lot in favor of men with rounded faces. And it is that this type of cuts usually favor all types of men but they do it especially to men with rounded faces since they provide them with a certain set of dimensions on their rather flat faces. As you know, the technique of undercut It is based on the fade or gradient, being hairstyles that play a lot with the chiaroscuro and with the contrasts. For men with rounded faces, large contrasts with cuts work very well. undercut Very short on the side hems and with a gradual evolution of the length, ending in a semi-long top and combed with volume without reaching too long layers.

The side parting is another timeless hairstyle that is often styled for this type of face. And he does it because side parting creates contrast for definition on rounded faces. To achieve a more flattering effect we can style the hair with a little lopsided volume in the part of the bangs, although with the hair completely removed from the face and a beard of a few days it can also be very stylized for this type of rounded faces.

Medium-length cuts also stylize this type of rounded faces, especially in hairstyles with many layers and different levels of blunt. They add dimension to the face and thanks to the hairstyles with a lot of movement since they manage to hide the flattened effect of this type of faces. To emphasize the cut, you have to play with the blunt cuts in the cutting phase and, in the same way, play to create movements in different directions when styling.

Like the previous cut, hairstyles with tousled effects but with very short layers are flattering. instead of styling the hair down we will play to give height the layers with the hair combed up and in different directions.

Like straight hair, for curly hair and for men with rounded faces, medium-length haircuts and bangs tend to favor a lot. And they do it because create a very interesting contrast and a chiaroscuro effect that, as in other cases, add definition and create dimensions to the round face.

Both with lopsided stripes, and with stripes in the middle. Curly hair styled in either of these two versions they tend to style round faces and do it by the movement of the curls, giving prominence to the hair and not the face. In addition, beards in different lengths provide definition and contrast to rounded faces. 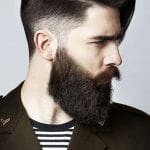 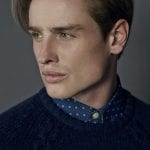 Asymmetrical style cuts are also suitable for men with rounded faces. This type of cuts that create great contrasts between one part of the face and the opposite, are totally flattering for these round faces precisely for this reason. They work very well when the contrasts are very marked, such as, for example, a very short side as opposed to another with a very long cape and bangs. If in addition, the Jimi Hendrix accompanied with a beard, this type of cut is a sure hit.

Do you know any haircut for round face that we have not mentioned? Leave us a comment and tell us your tricks.

Full path to article: Stylish Men » Personal Care » The best haircuts for men with round faces