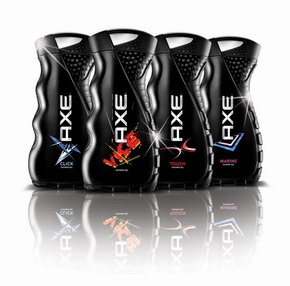 Personally, I believe that AX deodorants cause damage to their armpits and their users because of their strong alcohol content. However, I have tried the new AX shower gel and I think it is a good alternative to keep the body smelling good. Therefore, by the hand of Infobrand AX We bring you the description of this product.

A development expected, probably, by both consumers and marketers who evaluated that the brand was to be more umbrellas than just deodorants, is the one that finally emerged with the first brand extension that Axe introduces in our country, its new shower gel, which Unilever already markets in several European countries, Asia and the United States.

Axe It is not only the best-selling men's deodorant brand in the world, but also one of the top brands that young people identify with. Through his communication based on the concept of seduction, Ax has managed over the years to strengthen the identification of young people with his message, built by the way using the same code that they use.

So this brand enjoys an almost privileged position to become in more or less time, the umbrella of an extensive line of personal care products or other items, always aimed at the target of young men. Especially when Ax is, on the other hand, a Unilever brand, which therefore also has all the know-how in the other aspects of the development of possible line extensions, linked to the creation of the products and their distribution, among other issues.

In this context, Ax has just launched its new shower gels, intended of course exclusively for men, in some of the brand's traditional versions and in other special ones: the new products are presented with marine, click, vice and touch versions.

The brand introduced this new proposal saying that now “the Ax effect has reached your bathroom”, alluding to its positioning as an icon of seduction and an expert in fresh and long-lasting men's fragrances. It is about expanding his business, initially focused on the development of men's deodorants, to enter this new category. And perhaps anticipate other possible landings of the brand in other areas.

Fernando Desouches, brand manager, assures that “Ax is the best-selling men's deodorant in the country and in the entire world. So the strength of this brand allows us to expand the business to other product categories, as in this case we do with shower gel. This product is already marketed with excellent results in several countries in Europe, Asia and the United States, and we hope to have the same performance here. Thus, Ax presents the first liquid soap made exclusively for men. This launch will be supported by a strong investment, unprecedented for the level of support in this category. Finally, it is important to clarify that our country, together with Uruguay, will be the first in Latin America to add this product to its portfolio.

Present in more than 50 countries, according to Unilever, this fragrance brand aimed at young people looking for perfumes that reinforce their attraction, their masculinity and their power when it comes to seducing, came out to communicate its latest innovation with a commercial launch entitled « Iglesia ", developed by the Vegaolmosponce agency, under the concept" using soap as a woman makes you think like a woman ", where she once again emphasizes its seductive effect.

In addition to the commercial, the launch campaign for Ax's new shower gel includes a comprehensive communication platform that includes actions on public roads, the Internet, graphics and radio. It is precisely its communication that constantly breaks with established patterns, in favor of the most modern codes of young people, is what has led Ax to this privileged place within its category, which today augurs many more extensions of the brand.