What is the Wilkinson Hydro system? What can it contribute to shaving? The market for razor blades continues to advance, and Wikinson has been launching its innovative proposal for the world of shaving.

HR Wilkinson Hydro razor blades stand out for their design, very ergonomic and with rounded curves. Its handle is short and slim, for an ideal grip.

Between the advance that this system gives us, they are:

Multiple shares in one with Wilkinson Hydro

Wilkinson Hydro razor blades can be considered 4 in one, that is, trim, hydrate, contour and shave.

They cut to suit the user, by means of a lower head that adjusts in different positions, allowing you to choose the final density of the beard.

Hydration is carried out thanks to the gel that contains Aloe and Vitamin E, located on the upper head. This gel, when in contact with water, will lubricate the skin, preventing irritation from occurring.

As we have seen, profiling is made easier when shaving, since the head superior to the blades can be thrown back.

When it comes to shaving, its five blades remove any traces of hair in a single stroke, leaving the skin extra smooth.

The product has that name, "hydro ”, among other things due to the moisturizing band that is located above the blades. This band secretes a moisturizing lotion to the skin, throughout the shave. The skin is lubricated and thus the effects of the passage of the blades are less aggressive. An ideal solution for men with sensitive facial skin, to get a good shave close while caring for the face.

The number 5 indicates the number of blades or blades that make up this effective razor. The orientation of the blades is designed with the sufficient separation between them, for easy cleaning.

Wilkinson Hydro packaging is served with a support to store the razor when not in use.

As we are seeing, the contact surface of Wilkinson hydro razors is variable, thanks to a tab located on the head, which can be moved according to the area we want to shave. For the more difficult areas to pass (such as the chin or under the nose), the eyelash can be removed. In this way, the contact surface is a little smaller; although there is no hydration at that time, it is achieved greater manageability for those difficult corners.

One year of free football with Wilkinson Hydro

Wilkinson Hydro offers a year of happiness to football lovers. With the new Uncover and Win initiative, in addition to the benefits of a perfect shave, you can enjoy a year of football for free. How to get it?

You only have to buy a Hydro5 razor, during the period of the promotion, uncover and extract the Hydro Card, located inside. With it, you can redeem many gifts. 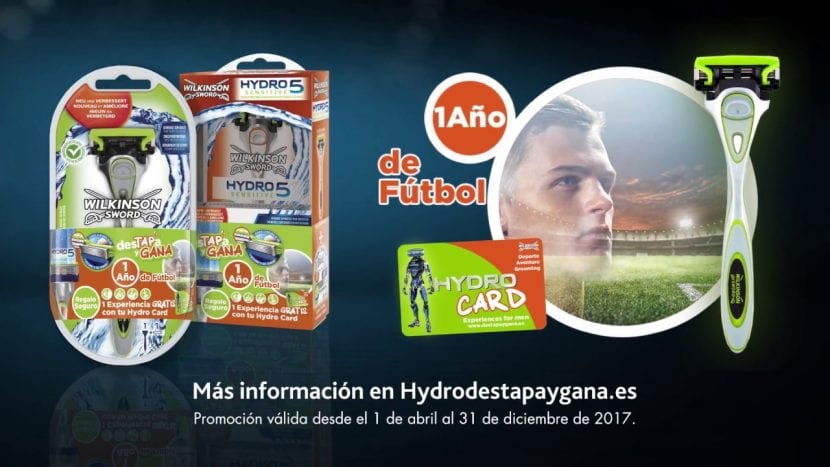 Entering the Hydro's website and entering the card code, You can choose between different experiences, linked to the world of sports. It is the example of adventure activities such as canyoning, hiking, climbing, sports such as BodyBalance and boxing, and also much more relaxing sessions, such as the Pilates, facials or a complete circuit of spa.

In the reserve of gel of the razor that we have acquired, there may be a real treasure for fans of the world of football. If a promotional code is found in said reservation, the prize that has been won is one year of free football. This award is in the form of a voucher of up to 1.900 euros, to be exchanged for tickets for all 19 matches that lasts one season in the First Division League.

Full path to article: Stylish Men » Personal Care » Shaved off » Wilkinson Hydro 5, the best shave and a year of football