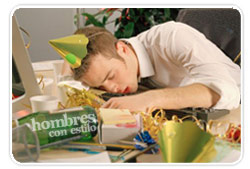 It is quite likely that, during the weekend or because not in an after hour after work you go to a party and have a few other drinks and that the next morning you will suffer from hangover.

La hangover (or curda as others call it) is the result of a mild inflammation of the brain followed by a state of dehydration. Hangover symptoms are quite annoying and can manifest as follows:

To avoid a hangover, the best advice I can give you is not to consume excess alcohol. If you do, try to drink excess liquids (water or juices) before and after drinking alcohol. It is highly recommended to drink approximately the same amount of alcohol consumed in water before going to bed to sleep, the next day the hangover will be substantially less, you will not wake up with a dry mouth and you will not have that feeling of constant thirst.

The food eaten before drinking also influences how alcohol affects the body, and the best would be a light meal rich in carbohydrates, an empty stomach assimilates alcohol 4 times faster than one that is entertained with a gentle digestion.

Now, if none of this works for you then try these natural recipes:

Full path to article: Stylish Men » Fit » Health » How to eliminate a hangover?